Wondering where I went?

I have no good excuse, really. Just a whole long list of teeny little excuses that have all piled up. Like the incredible amount of time I've been spending sewing! I made Princess and Music Man's Halloween costumes: 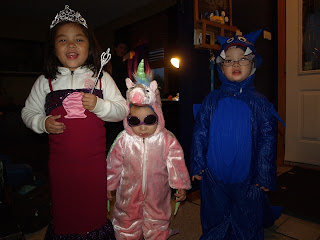 I was given requests for a "pink and purple mermaid princess" costume, and a "blue dragon with a blue tummy and blue spikes" costume. I pulled them off, both without the benefit of a pattern. Baby Belle's costume, on the other hand, was a consignment store find. She's too young to care, it was the right size, a great price, and fit with the mythical-creatures theme!

In addition to the costumes, I've been churning out Christmas gifts at a steady pace. We try to keep our gifts simple, relatively inexpensive, and mostly hand-made. Most of the people we give gifts to don't need much "stuff", and it's more about the gesture. Plus the hours I put into making something should communicate that the person is important to us! (I'd post pictures, but many of them are for my nephews, and my sister reads this blog - got to keep them a surprise!)

I will, however, share this photo of something I made the other day, as it's similar in construction to several of the gifts I've made: 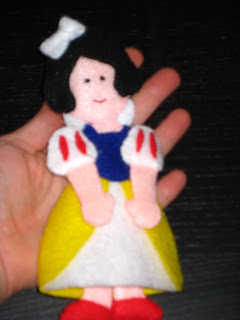 Felt Snow White!! She was the test-run and now on her way to her new home, and I'm now making a set of princesses, princes, knight and dragon for my kids for Christmas!

We also got to meet our first niece for the first time! My sister has two boys and my husband's sister has three, so having a nice at long last is a big deal for me (mostly because it gives me another girl to sew for).  This picture is also because a friend requested to see what I look like with short hair: 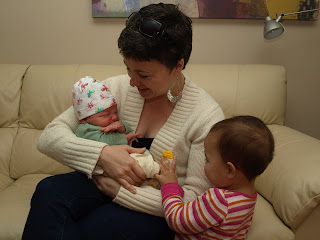 Baby Belle was so excited to see her newest cousin! She's finally at the right age to be completely fascinated with babies. (I should add that BB is older than her baby hair makes her look. She's over 20 months old.)

Then we had houseguests. Mostly just my mother who was here for 12 days, but also my sister, her husband and their two small sons came to stay for a couple of days. What happy chaos! Ten fun-loving people in a small, 3-bedroom bungalow! We feasted and played and had a marvelous time.

There's another important project I've got on the go right now that I'm not quite ready to go into detail about. But it's a biggie, and it'll most definitely be influencing what I post about here, so stay tuned for that one in the next day or two.

Lastly, I should mention the results of my 21 Day Sugar Detox:
EPIC FAIL!!

Holy cow. I have way more emotional-eating issues than I was aware of! I didn't get all the way through the 21 days. In fact, I fell face-first into a pan of homemade granola bars somewhere around day 10, I think. What I did learn, though, is that different emotions trigger different cravings. And mostly, those cravings have way more to do with texture than taste. The awarenesses I gained even from that short time were fantastic, and I'm looking forward to tackling the 21DSD again in the future.

For now, however, I really need to get back on track with my eating habits. Nicole and the gang started a Whole30 on the first of the month. My original plan was to join them, but I then decided to postpone until my mother heads home and life settles down a little. Now, however, I'm modifying my plans once again. I don't think this is the right time for a Whole30 for me, mostly because I know I'll need to be relying on some SWYPO foods in the next little while. So, instead of a Whole30, I'm going to do a Paleo For 30 challenge. Which means I can still eat Paleo-fied muffins without guilt, and if I put a little honey in a glaze for some meat I'm not going to stress about it. But I will not be pigging out on Paleo treats every day! I'm just going to work on getting back to the meat-veg-fats basics for 90% of the time.

And now, I'm off to feed my kids lunch, get them sorted out for nap/quiet time, and assemble a cake for a going-away party. I'll post pictures of that later - with more things to say!
Posted by Jac at 11:41 AM

What's on YOUR mind?

This is What it's All About