On this date six years ago I married my best friend. No, really. Francis and I had been friends for four years, and very good friends and co-workers for a year before we began a romantic relationship. I had often heard it said that relationships based on friendships were the strongest, but I'd never experienced it before - I'd always dated guys first and then gotten to know them over the course of our relationship. Because Francis and I already knew each other so well, our relationship got serious very quickly. We weren't allowed to officially date for the first two months after discovering our feelings for each other (since I was his supervisor at work), but once we started actually dating it was less than six months until he proposed - then seven months until the wedding. 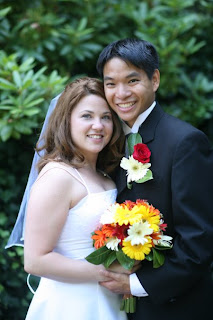 (Even with the 10lbs I regained, I still currently weigh about 15-20lbs less than I did in that photo.)

Our relationship has only gotten stronger over time, as we've faced the challenges of parenthood (three babies in three years!), moving, him finishing his education and beginning his career, buying a home, and life in general.

This guy really is my biggest cheerleader. Whatever I choose to do, he supports it. And this has made all the difference on my path to weight-loss and greater health. When I wanted to join Weight Watchers but wasn't sure about the cost, he said it was no problem to include it in the monthly family budget. When I wanted to quit eating gluten, he started buying me rice pasta and other things I could eat. When I wanted him to try quitting wheat, he gave it a shot - for me - and was surprised by the difference in how he felt. When I wanted to go off the deep end and do this crazy Whole30 the first time, he jumped right in with me. When I need to make time to work out, he looks after the kids without batting an eye. When I need a nap, same thing. And on days when I just can't deal with cooking, he knows where to pick up a delicious rotisserie chicken that makes the whole family happy.

He just makes my life better in every possible way.

Breakfast: A hamburger patty with half an onion cooked in ghee, a small slice of yesterday's frittata with grilled veggies. Two cups of decaf with coconut milk.
Lunch: Leftover pork with a quarter of an avocado, banana peppers and cherry tomatoes.
Supper: Meatza from Well Fed topped with sliced chicken breast, red onion, banana peppers and heirloom tomatoes. Supper was made by my beloved, and we dined after the children were in bed. Closest thing we get to an anniversary date with no babysitter!
Snacks: A small snack ball and about a cup of cherries.
Posted by Jac at 9:04 PM

What's on YOUR mind?

This is What it's All About